Sam Wilson was a United States Air Force Pararescueman and served tours in overseas military campaigns. During this time, was selected to test a prototype military wingsuit alongside his friend Riley. Their wingsuits were critical in their missions, as RPGs used by the terrorists prevented the Air Force from using helicopters. After Riley was nonetheless killed by an RPG, with Wilson unable to save him, the latter completed his mission and left the Air Force. Wilson then became a trauma counselor aiding returning war veterans. Some time later, Sam met Steve Rogers, aka Captain America, and aided Rogers in facing off against Hydra, a fascist group bent on ruling the world. Captain America helped Sam reclaim his former flight suit, which he used during the fight. Sam continued to use his suit to aid Cap and his allies with other endeavors, earning him a place in the Avengers under the codename Falcon. Sam is a courageous man with a good heart. His compassion earned him the respect of Captain America, who later gifted his shield to Sam in hopes of having Sam continue his legacy. 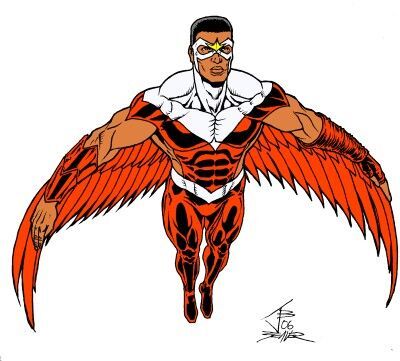