Easter eggs. Gotta love them! Here is an index of Easter Eggs from the Planejammer Campaigns that have found their way into my published works. 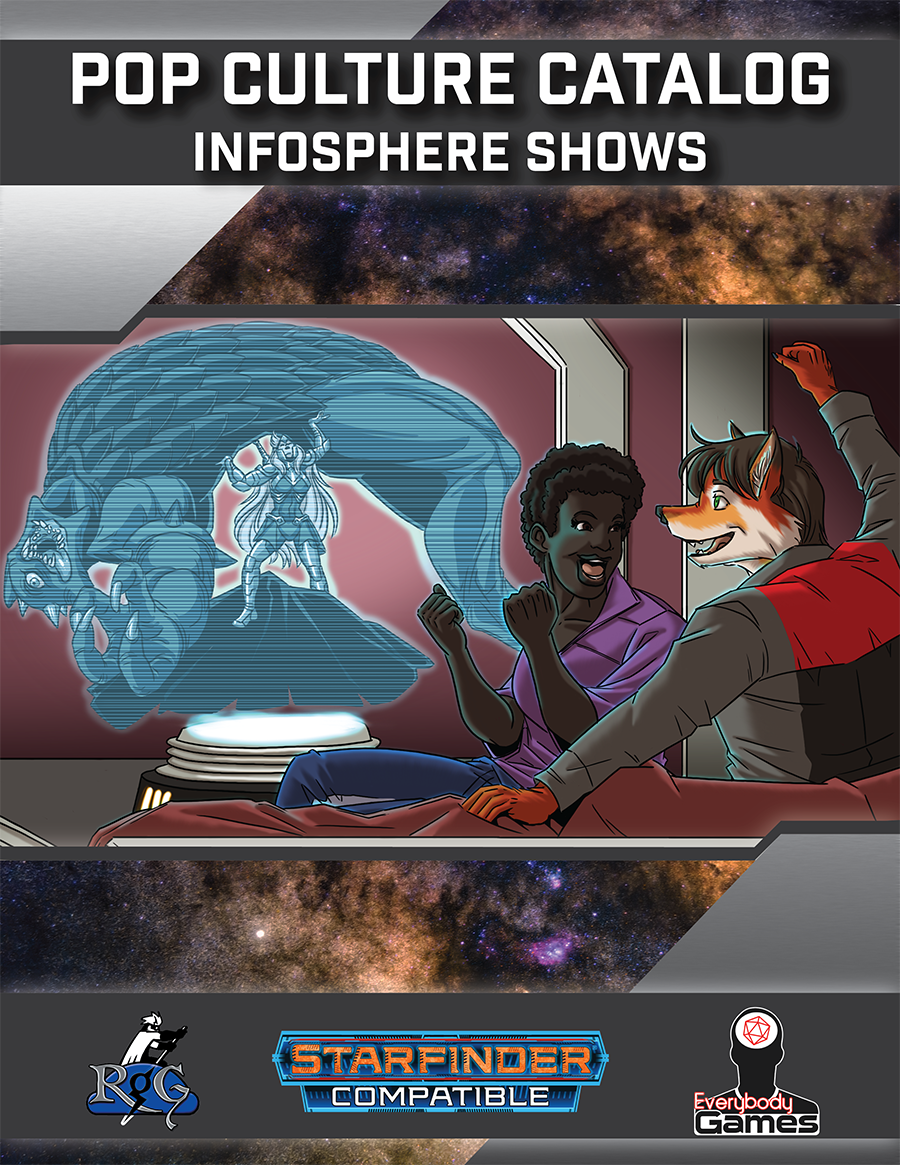 DESCRIPTION
A fast-paced and stunt-filled show for gearheads, Catch My Drift! is a series focused on testing both mundane and magical

gear for a variety of vehicles and starships in excitingly exotic locations and worlds throughout the depths of space. In pushing each vehicle or starship they ride to the absolute limit, the show’s cast performs a number of extreme stunts and challenges to see what each featured vehicle can do. Things often don’t go as planned for the so-called Drifters, with injuries and mechanical mishaps frequently punctuating episodes. The series began as a series of segments on the Spaz streaming service, where it earned donations and paying subscribers. Eventually Icewire picked the crew up, rebranded them as Catch My Drift!, and the show exploded in popularity. Now the series runs both on Icewire and Yousphere and is rapidly becoming a hot property.

The series features hostess Capt Krysa Teakshanks, a beloved ysoki icon from Hyperspace Station, and her crew, including android engineer Falak 13, elven pilot and solarion Illiana, aasimar empath Melisande, vesk xenoarcheologist Jarimana, and skittermander gladiator Morg. The crew’s beloved cat, Opal, makes frequent appearances on the show and can be found on nearly all of their series’s merchandise. A typical episode features a segment where Falak 13 and Melisande dissect the vehicle and comments on its construction, a segment where Jarimana lectures on the vehicle’s history, and a segment where Illiana and Morg partake in demonstrations of the vehicle’s capabilities, most often in the form of races and death-defying stunts. Kyrsa acts as narrator for every segment in addition to starting and finishing each episode while also serving as an audience proxy for asking transitory questions. In addition to their on-screen antics, the Drifters are well known explorers and adventurers and numerous gossips have tried to turn the cast’s off-screen adventures into scandal, but the crew is entirely unfazed by the barrage of YouSphere videos that spring into existence following every mission, such as a clothing-optional party that the crew infiltrated or a barhopping odyssey that took the team from Hyperspace Station all the way to the Galactic Ring of Whimsy World. No matter how egregious, every escapade is spun into promotional material for the next episode that serves only to excite fans even more for the Drifter’s next big stunt. Recently rumors have begun to spread that Catch My Drift! would receive a Sphereflix contract for a season of 12 full-length episodes, much to fans’ delight.

FANDOM PERK
Hours spent watching Catch My Drift! have granted you a familiarity with starship tech from the bleeding edge of current innovation. Whenever you attempt a skill check to use a crew action aboard a starship or a skill check to pilot a vehicle, you can add a +2 enhancement bonus to your check. This ability must be used before the result of the skill check is revealed, but you can use it after your skill check has been rolled. Once you’ve used this ability, you cannot use it again until you’ve regained Stamina Points by resting for 10 minutes and spending 1 Resolve Point. 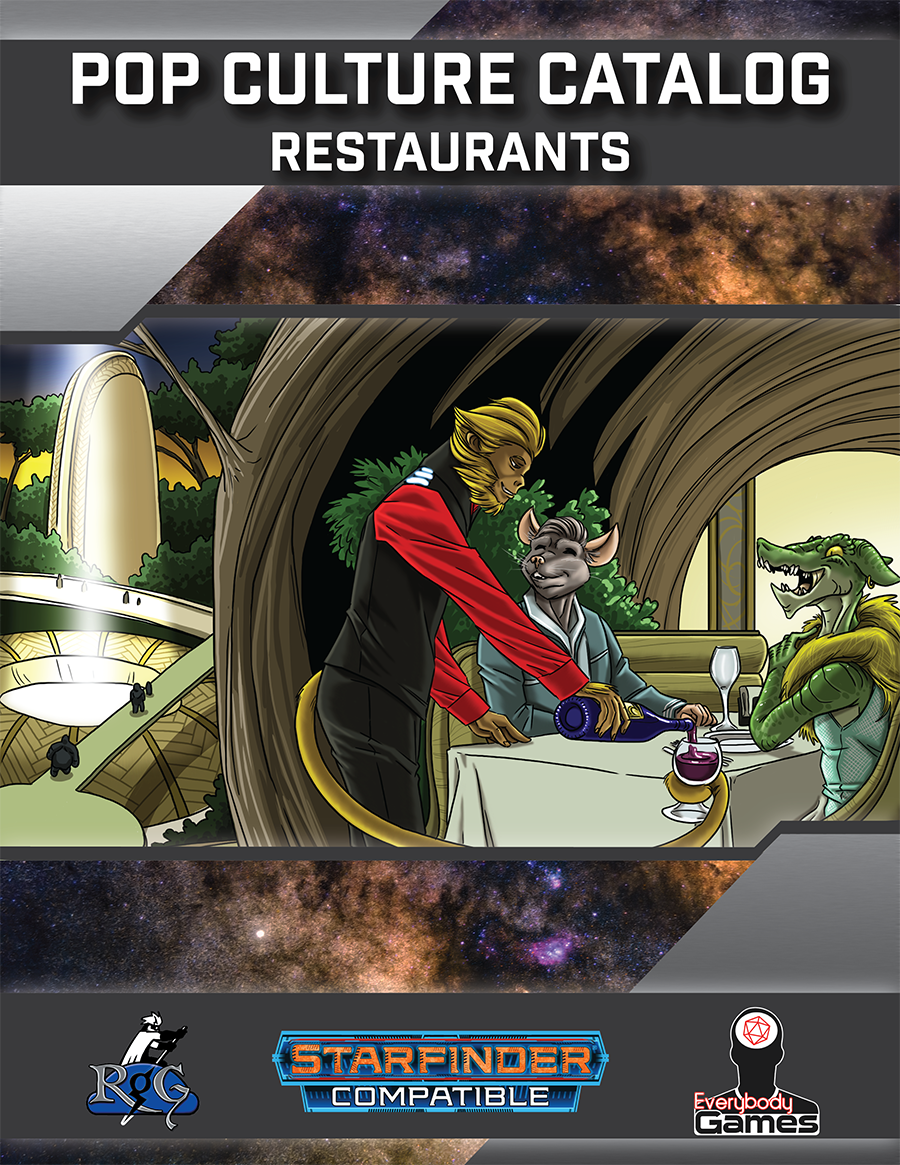 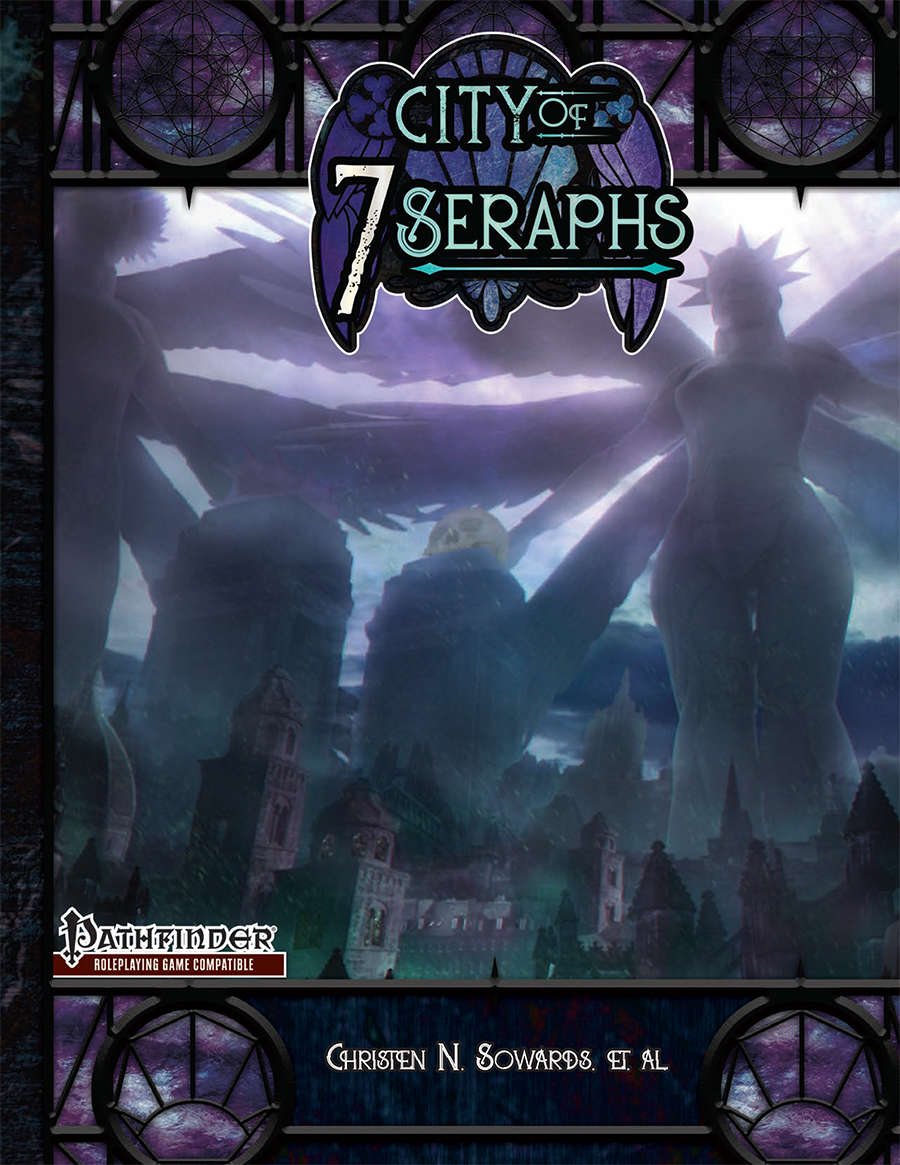 History and Current Events (kaiju attack)
The “dock ape” hero Hoopaka G’crit, a psychic warrior of renown that delivered the final blow to the beast but lost his life in the process. A thirty foot tall statue of him now stands at the mouth of the docks he gave his life defending. [Hoopaka was Kaolin’s cohort in The Seven Stars]

Madame Syzygy’s (The Garter):
The poshest house of companionship in the district. Operated by a disgraced royal from the prime, Endora Syzygy (Non Aligned LN female human aristocrat/rogue 7/7), she claims to have something for every species, gender, and preference. It is rumored that she supplements her offerings with shape shifters in order to make good on that claim, although no one has been able to prove it. Her son, Casmir, is a regular face in the demiplanar black market known as Destiny’s Bodice. [Casimir was one of The Misfits and his mother was a regular NPC]

Quirky Quentin’s Outfitters (The Canopy):
Quentin’s caters exclusively to the small folk, particularly halflings and dromites—Only small, tiny, diminutive, and fine size gear is available. Masterwork, magic, psionic, and alchemical augmentations are all available should budget permit. Quentin K’tel, (Non Aligned LG gnome rogue 4/expert 2) the proprietor, is a jolly youngish starborn gnome with a penchant for off color humor. [All gnomes with the surname K’Tel are decendants or relatives of Dudley’s character Acme Ronco K’Tel]

Warehouse Row (The Garter):
A third of the district is nothing but warehouses. Various interplanar trading companies maintain private warehouses here: The Ring of Balthasar, The Stray Manor Seven, The K’tel Cartel, The Spelljoined, and more. [Stray Manner Seven are The Seven Stars, K’Tel gnomes are all descended from Dudley’s character Acme Ronco K’Tel, The Spelljoined are themselves]

Alissa Starbow (Bookbinders CN F bloodborn nexus 8):
Raised in the Kaolin Cluster in the Deep Astral, Alissa has a low tolerance for things that are "cute.” [Named for Kaolin f The Seven Stars]

Lenata Starchilde (Bookbinders NG female aasimar cleric 8/ sorcerer 2):
Angel blooded and possessed by wanderlust after being raised in an insular asteroid community, Lenata has spent twenty years piloting arcane sailing ships from world to world and plane to plane. Her group, the Spelljoined, is based on an obscure demiplane but maintain a warehouse here and use the city as their base for explorations into shadow and the demiplanes of the ethereal. Their ship, The Nomad, is always looking for good crew that are willing to work hard and have experience of the many worlds. The Captain, Vedis Valentine (Non Aligned CG female maenad wilder 7/soulknife 3), is rumored to be tough but fair, and lavish in rewarding loyalty. [Lanata is the Pilot and and Vedis is the Captain of The Spelljoined] 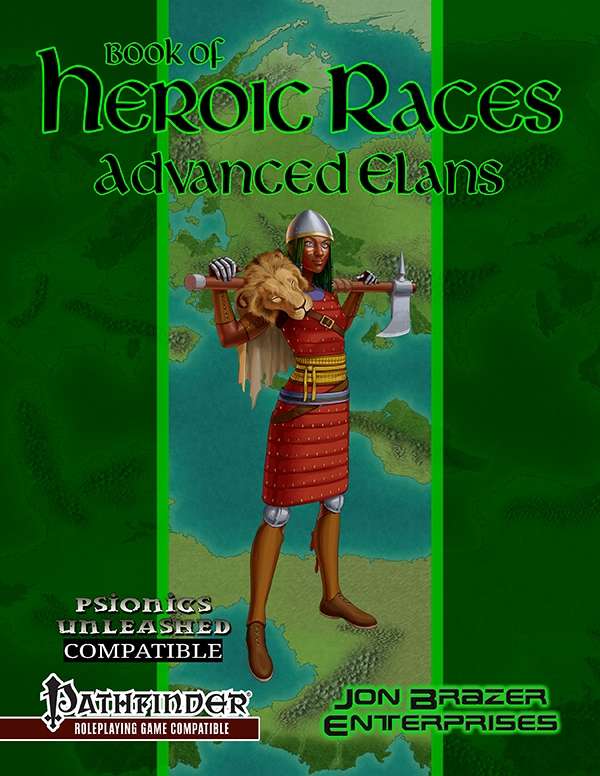 Sects and Violence (intro fiction) is a Misfits short story.

by: DungeonMasterLoki
See All Pages